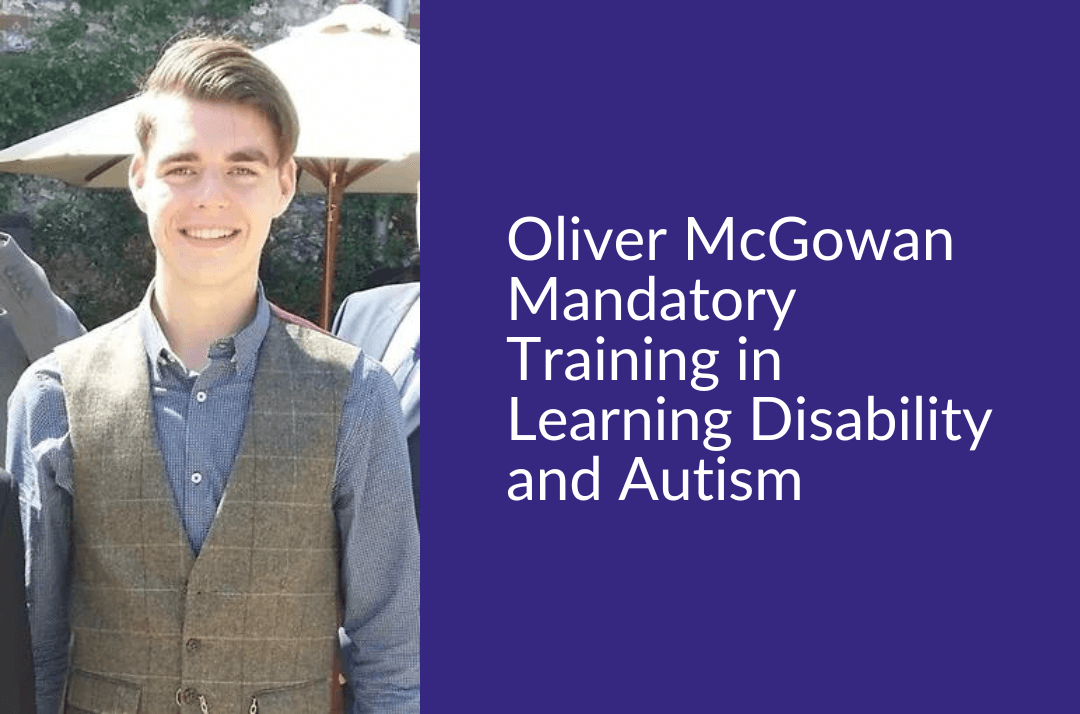 Appeals from the family of Oliver McGowan have led to new mandatory training in learning disability and autism.

As an infant, Oliver suffered meningitis and received diagnoses of mild hemiplegia, focal partial epilepsy, a mild learning disability and high functioning autism. Throughout his childhood, Oliver developed a good sense of humour and aspirations for the future. As a teenager, with several sporting accomplishments under his belt, Oliver began to train as a Paralympian.

Oliver was admitted to a children’s hospital in October 2015. He was experiencing partial focal seizures and felt scared and confused. He was discharged after a few weeks and given antidepressants. His seizures worsened and he was readmitted that December. Despite having no diagnosis of mental illness or psychosis, he was given antipsychotic medication and held against his will. This had a hugely negative impact on his mood. Doctors noted he was sensitive to antipsychotics. After the removal of the medication, his mood and seizure activity returned to normal.

In April 2016, Oliver was admitted again with partial seizures. He was given antipsychotics again. He suffered an Oculogyric Crisis causing his eyes to roll upwards and stay there. After 6 hours, during which the doctor believed his symptoms were behavioural, he was eventually given Procyclidine to counteract the reaction. Oliver suffered other potential side effects including hallucinations, up to 30 seizures a day, problems urinating, extremely high blood pressure and sweating. Oliver was moved to a specialist adult hospital. Staff restrained him, gave him no privacy and prescribed different antipsychotic medication.

Oliver was then transferred to a Psychiatric Intensive Care Unit. Here, staff immediately saw he did not need to be detained and they reduced all antipsychotic medications. He received support from a specialist learning disability team.

That October, Oliver experienced a cluster of partial seizures and was admitted to general hospital. He developed pneumonia and was intubated. Staff sedated him and gave him antipsychotic medication. Oliver’s temperature reached 42°. He suffered tonic-clonic seizures. His brain was badly swollen. He would be severely disabled. Doctors suspected neuroleptic malignant syndrome, a life-threatening reaction to antipsychotic medication.

The McGowan family strongly believe the hospital staff are to blame for Oliver’s death, especially those who prescribed antipsychotics after his previous bad reactions. They believe staff did not make reasonable adjustments to accommodate for the needs of someone with a learning disability and autism. The family have campaigned for years to see improvements made in healthcare.

Their hard work has paid off. The Health and Care Act 2022 has written the Oliver McGowan Mandatory Training in Learning Disability and Autism into law. This is a standardised training package developed by Health Education England and Skills for Care. The training was designed, delivered and evaluated with the help of people with learning disabilities and autism.

In trials across the UK, researchers have seen positive results. 61-88% of learners reported changing their behaviours after the training. 80-94% said the training provided new information, helped them recognise unconscious bias, made them aware of the needs of autistic people in healthcare settings, and gave them new ideas about how to support autistic people.

We are happy to see these results as this training can prevent further deaths. We applaud the McGowan family for their dedication to changing our healthcare system and hope they are comforted by this result.

High quality training courses are absolutely vital, especially in health and care settings. If you share our passion for training and would like to become an accredited centre, please get in touch.

You can find out more about Oliver McGowan and his family’s work at olivermcgowan.org

We use Cookies to improve your user experience on this site.

You can find out more and manage your Cookies using the tabs on the left. We've also updated our Privacy Policies.
Necessary Always Enabled
Necessary cookies are absolutely essential for the website to function properly. This category only includes cookies that ensures basic functionalities and security features of the website. These cookies do not store any personal information.
Non-necessary
Any cookies that may not be particularly necessary for the website to function and is used specifically to collect user personal data via analytics, ads, other embedded contents are termed as non-necessary cookies. It is mandatory to procure user consent prior to running these cookies on your website.
SAVE & ACCEPT

The EU GDPR is designed to help all of us have more control over our personal data, and how is it used.

Who does the information GDPR apply to?

Data subjects, being all visitors and users of any website who are members of the European Union, and therefore who submit personal data. advantageaccreditation.com is the data processor and data controller of this site. You can find out more about this law here.

This Privacy Policy sets out how we use and protect information that you may provide when you use this website.  Your privacy is protected and important to us. If you provide identifiable personal information it will only be used to help us respond to your requests and to help you get the most from our services.

We may update this policy periodically, please check this page to ensure that you are in agreement with any changes.

Personal information, basically any data that can be used to identify or contact you is collected so we can respond to your needs.  This could include your name, business name, address details, email, telephone numbers, or information pertaining to your enquiries. You may also at times be asked to leave a message about your enquiry.  Websites also collect your IP address through the use of Cookies (find out more about cookies below).

If you opted-in to our mailing list, you may receive occasional emails on important updates or service information. You have the right to opt-out or and have any personal details removed at any time, please email [email protected]

What We Do With The Information We Collect

Information is saved until the enquiry is dealt with, and then archived with the project or on cloud based systems if you are an involved in ongoing projects.  We also retain your contact details and information in the emails you have sent, but you can request to have your personal details deleted at any time.

In our commitment to ensuring that your information is secure and to prevent unauthorised access or disclosure, we have suitable physical, electronic and managerial procedures in place to safeguard and secure the information we collect online.

You may choose to restrict the collection or use of your personal information in the following ways:

User-level and event-level data associated with Google Analytics cookies is retained for 14 months and then automatically deleted.

We have implemented IP Anonymization, simply put, the last three digits of your IP address are set to zeros in memory shortly after being sent to the Analytics Collection Network. The full IP address is never written retained, or written to disk.

This site also uses cookies to improve your user experience, find out more or manage them here.